ZHAFIR IS READY FOR AN ELECTRIC FUTURE

A new dimension for technology to the point. For the first time Zhafir is offering electric solutions in a range from 400 to 33,000 kN. By introducing the new Jenius Series, a modular hybrid that offers a two-platen solution, the range of applications has also been considerably expanded. Zhafir headquarters believes it has already optimally positioned itself for the electric future. Further developments are to follow.

The new power range is complemented by various performance variants, such as “F” (Fast Cycling) for short cycles or application-oriented packages for precision multi-component jobs, for example. Zhafir headquarters in Ningbo, China, sees this as a major milestone: With the available electric model ranges all applications for sophisticated manufacturing are immediately covered. 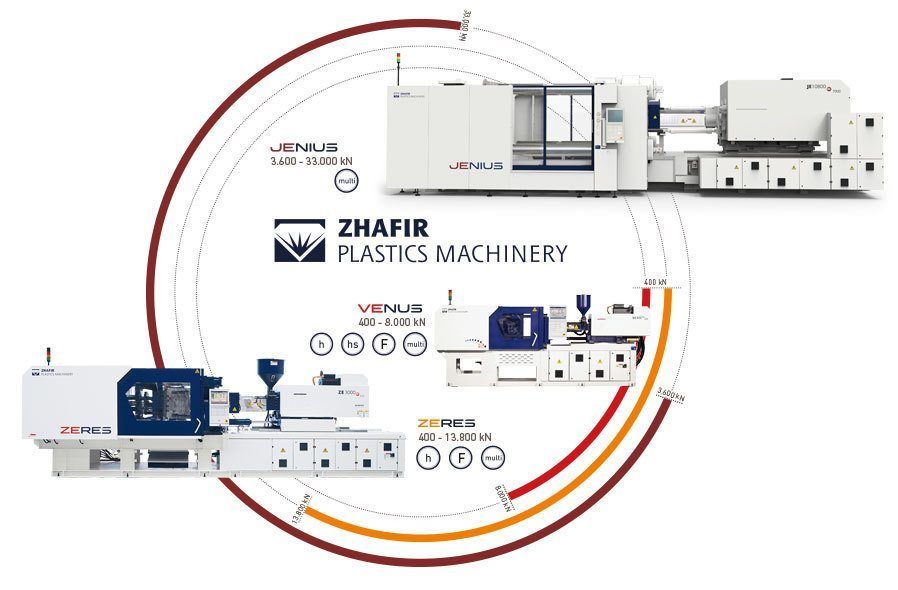 Getting to this point has required a lot of staying power, but now we are in a great position to transfer the advantages of electrics to all sectors of application throughout the plastics processing industry. Precision. Dynamics. Speed. Top-quality manufacturing. And all of this comes with affordable and clever cost structures. Add to this energy savings verifiably measured in the high double digits, as high as 70% in fact. Every rationale speaks in favor of an electric future. And you can be sure that with the introduction of the third generation of technologies further advantages will be added as early as 2019.

With the fully electric Venus machine, premiering in early 2007, Zhafir Plastics Machinery made the first breakthrough. Since then, with the Zeres Series, developed with identical construction features but designed as an electric entry-level model with integrated hydraulics, the second facet in the diamond was sharpened. In as many as 50 countries worldwide more than 13,000 Zhafir machines have now been installed.

“The Venus, Zeres, and now the Jenius machines make up our current backbone because we at Zhafir believe that the future of injection molding will be electric”, says Zhang Bin, CEO of Zhafir Plastics Machinery. Sales figures that have been consistently rising for years and the positive response from processors confirm this message. Remarkably, in Germany – the core market for plastics processing in Europe – the company currently sells more electric machines than hydraulic ones. 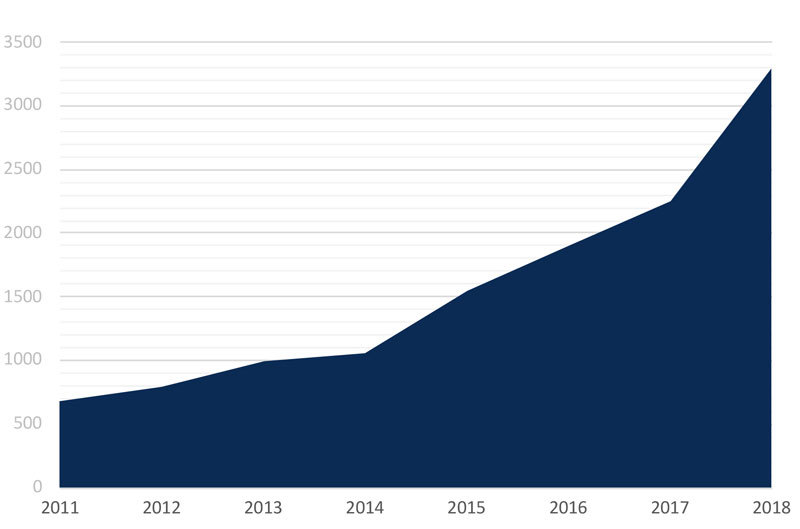 Just 10 years ago electric injection molding machines were reserved exclusively for the high-end applications sector. The production costs – and at the same time the cost of buying the machines – were simply too high. Japanese manufacturers had been the first to occupy the high-end sector and dominated the field; they continue to play a major role to this day.

Yet it was only a matter of time until this would change. First of all, with the founding of Zhafir R&D in Germany in 2005 the revolution in the world of electric injection molding technology was unofficially launched. Under the direction of Prof. Helmar Franz a team of German and Chinese engineers worked feverishly behind the scenes. Zhafir was pursuing a bold vision. The goal was both a clear and a challenging one: electric for everyone. Electric injection molding machines at the price of hydraulic ones. Not only in premium sectors, but for the standard ranges too, right down to the simplest of applications – perfect example for “Technology to the Point” for electric drives.

By 1998, CEO Mr. Zhang Jianming had already initiated and promoted the development of fully electric machines at Haitian – acting from the deepest conviction that ultimately electric drives offer a whole range of advantages when compared with hydraulic. Beside the high price of the machines up to now caused by manufacturing costs. Supported by Haitian’s experience and production expertise, Mr. Zhang saw the possibility of making a lasting change. As basic developments took their course, the fully electric Haitian HTD series was created, which eventually was passed on to Zhafir, there to be further developed and optimized into the Venus Series. Meanwhile, Zhafir’s German engineering team was also working on the innovative Mercury and on other premium technologies that were immediately to become included in various different machine ranges.

In a sense, Zhafir thus took on a pioneering role in broadly based electric solutions. The premium markets were already partly “electrified”, it’s true, but traditionally hydraulic markets were the majority. Live applications, benchmarking, honest discussion, mold tests, and sales and service partners around the globe have little by little paved the way. In retrospect it can be said that Zhafir demystified the inflated status of electrics, brought them down to a practical level and into the production workshops for standard applications. At the beginning it was a matter of persistent persuasion, using warm words and hard facts – hydraulic vs. electric, tradition vs. future. The advantages in performance and costs are obvious. Once interest has been aroused, the facts almost always speak in favor of an electric solution. In the meantime, Zhafir has consistently expanded its wealth of electric solutions with modular ideas to now include combining two-platen technology for large-size/long visible parts.

In the starting blocks – the next generation of technologies

In 2015 Zhang Bin assumed responsibility at Zhafir for bringing the development of electric machines into the next generation of technologies and for promoting digitalization.

“The future is electric” – this is a clear acknowledgment by Zhafir that it will continue on the path already taken. It’s not just the statistics of the global market data that demonstrate that Zhafir is going in the right direction. But at the plastics industry’s leading trade fairs the trend towards electrics is also apparent, which means that Zhafir is in very good company. On this point Zhang Bin says: “Whether you take NPE, Chinaplas or even the K Trade Fair, electric machines are making ground in all markets. This confirms our decision to expand our portfolio of solutions even further. We are proud of our achievements but still far from satisfied and continue to see possibilities for offering electric solutions that are even more broadly based and cost-effective.” 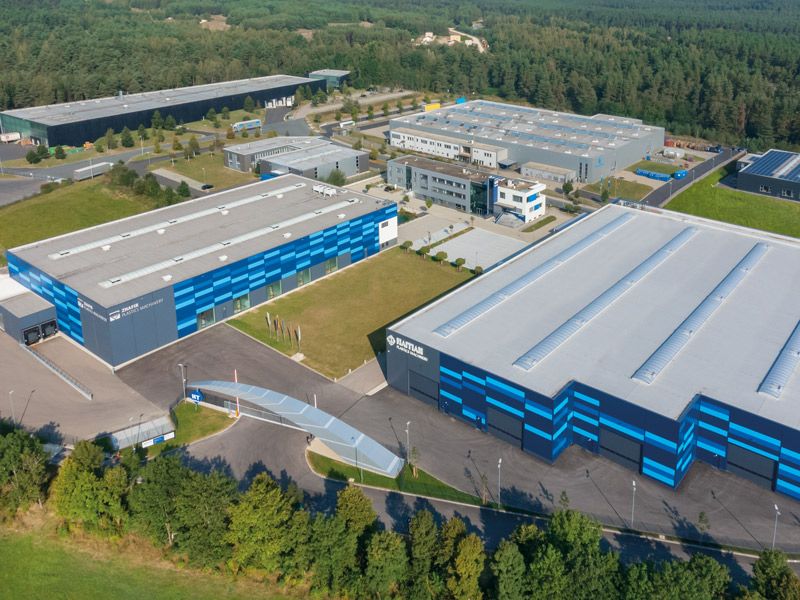 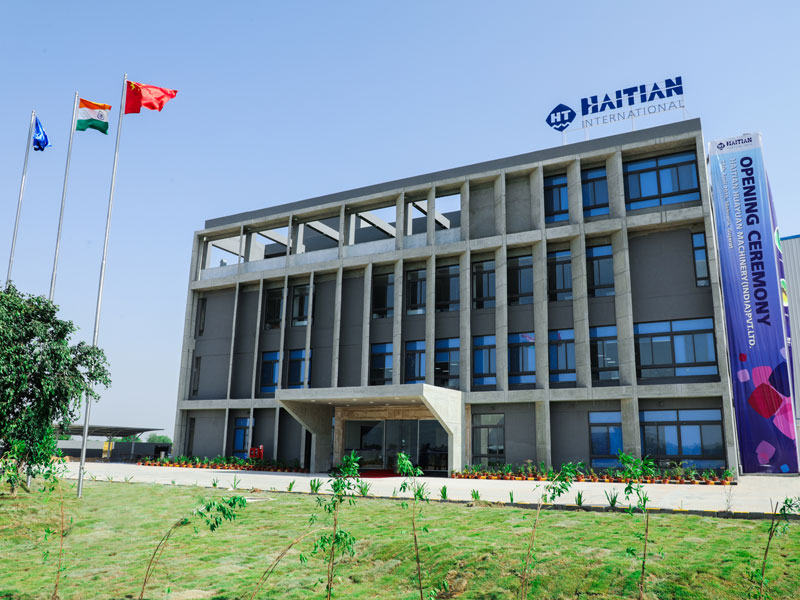 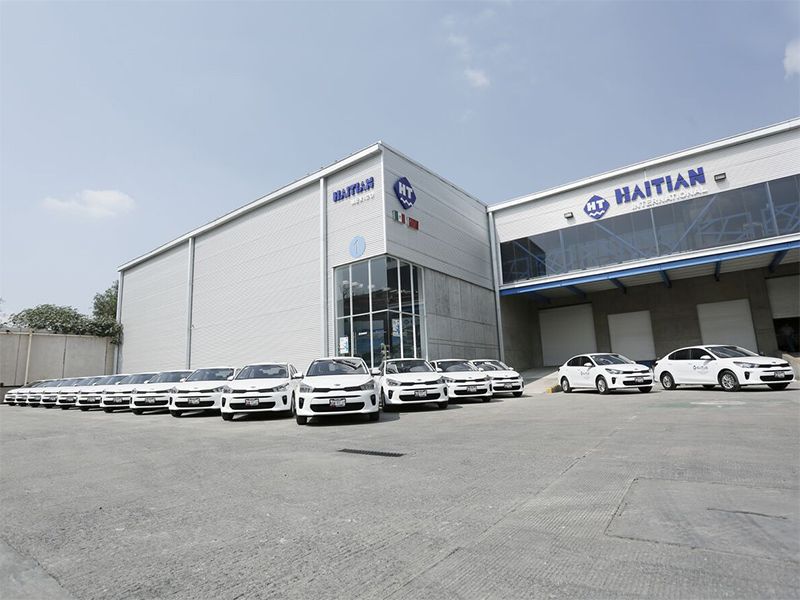 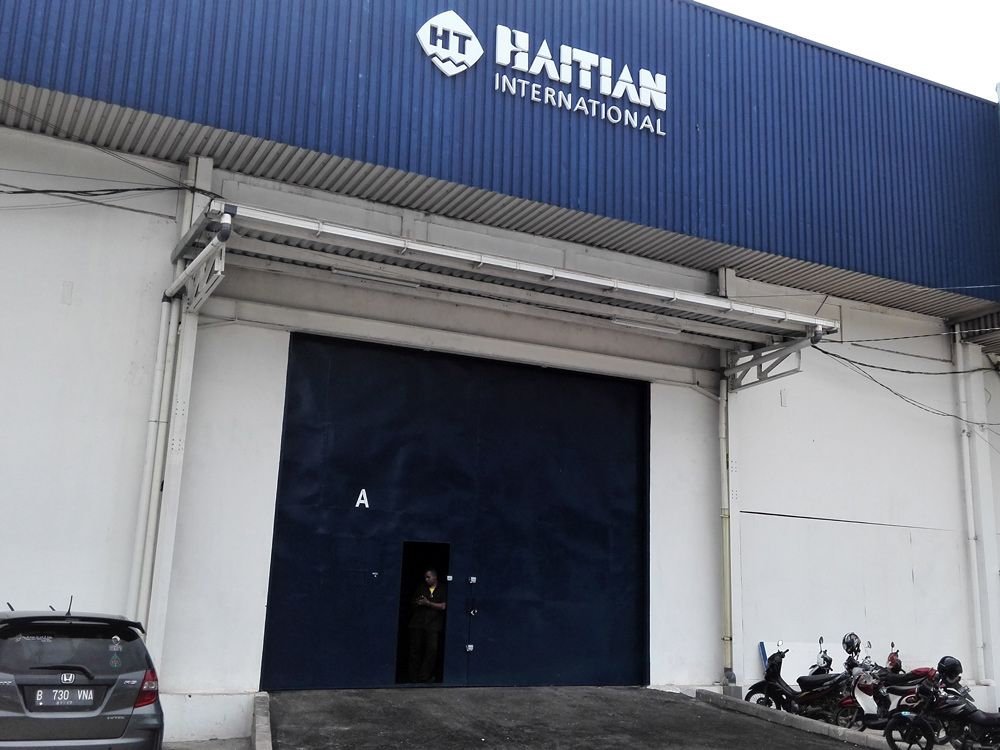 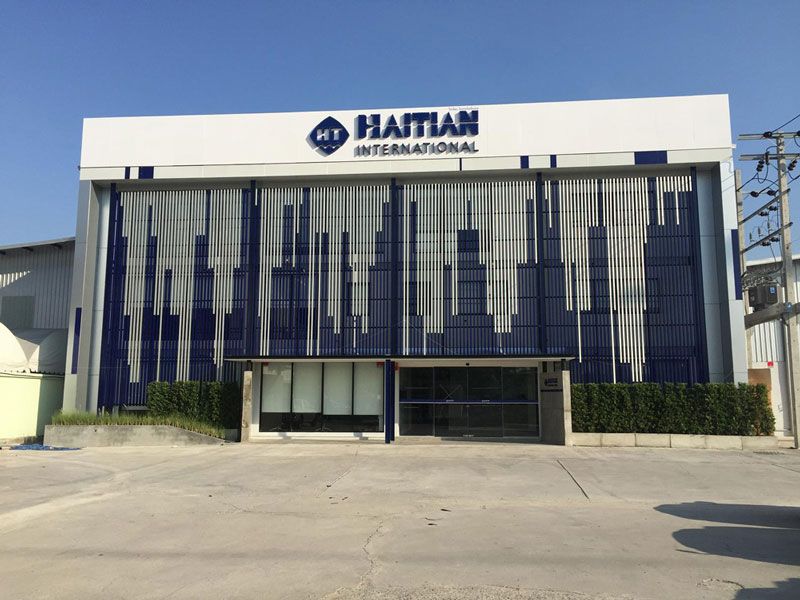 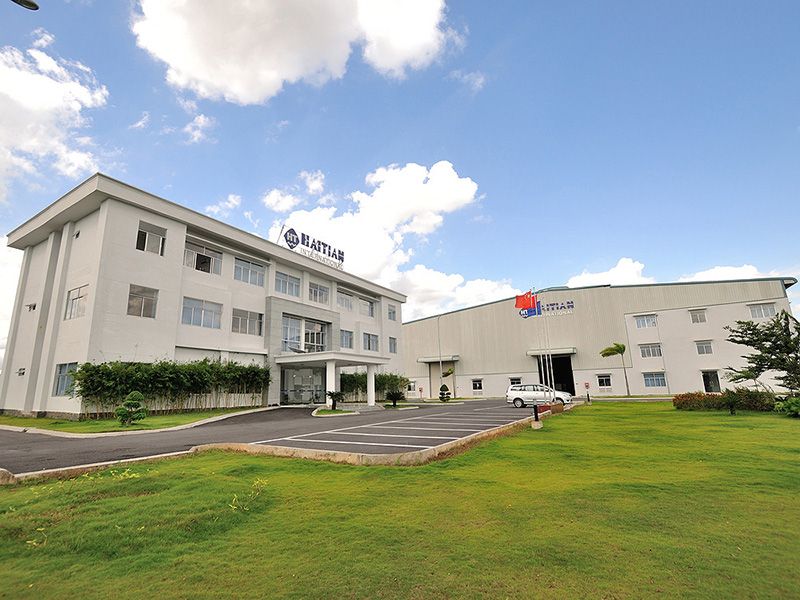 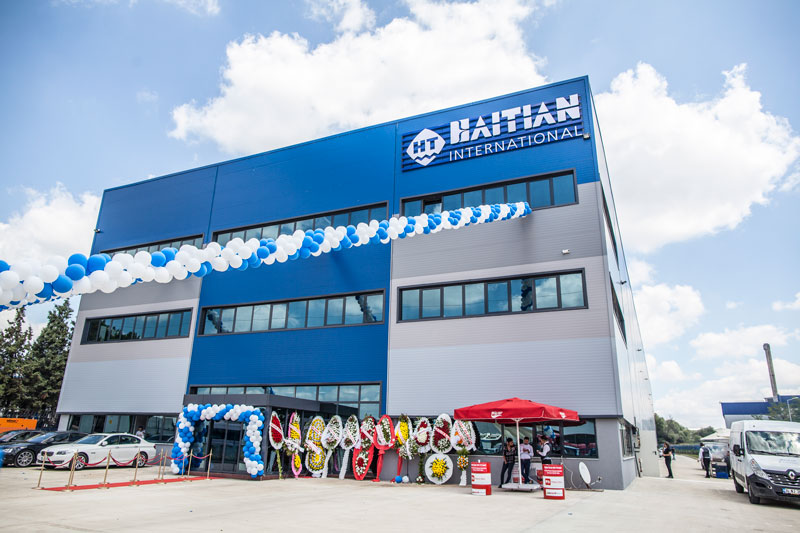 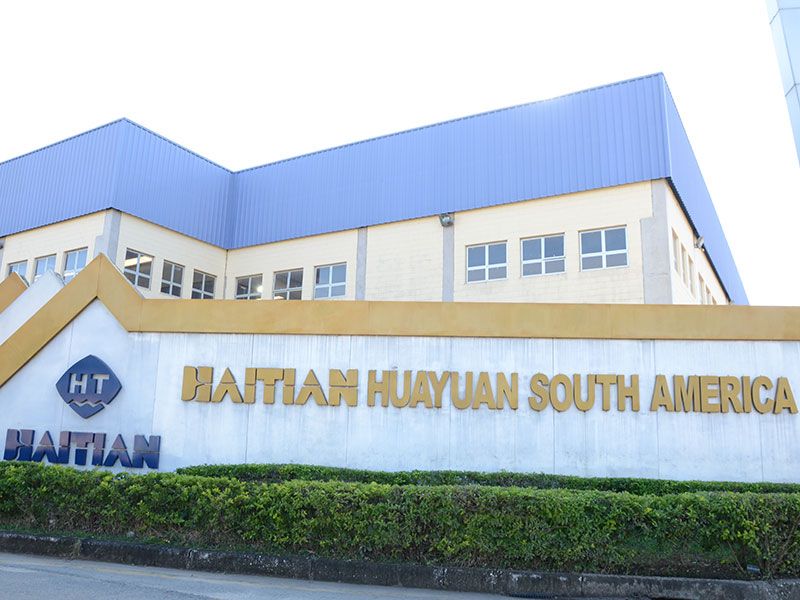 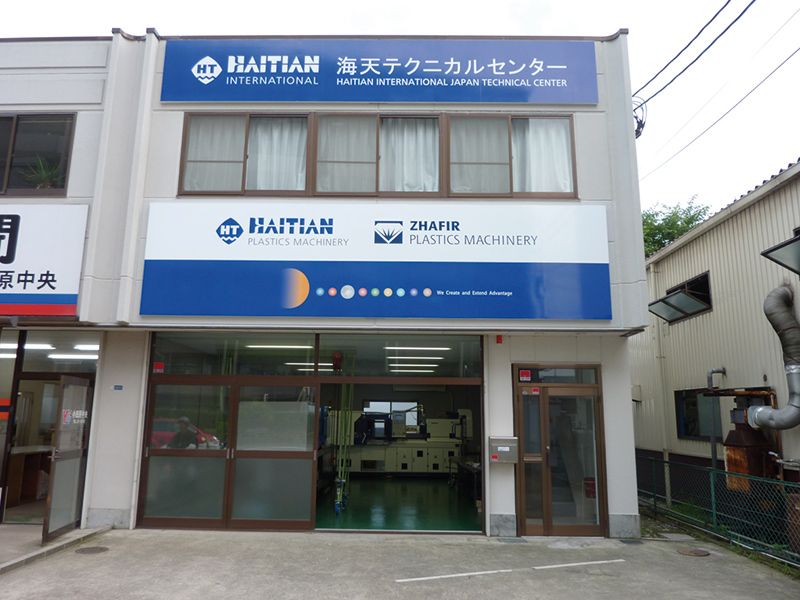